Anyone who has had game consoles in their childhoods, as I have had with mine has probably heard all the flak that they get from parents and other adult figures.
They'll cause you to be violent, they say.
They'll make you a couch potato, they say.
They'll rot your brain, they say.
In the case of my own family, they said a lot of things to that extent. And yes, back then I completely tuned them out because I had deemed their opinions false and wrong.
Yes, there are violent video games out there in the world, but my personal preference is usually not towards these types of games. I hold the belief that playing violent video games does not make one violent themselves. Though, I also hold the belief that video game playing time should be monitored by parents if the child is at an impressionable age. I know it sounds contradictory on my part, but it's true. If parents can supervise their children, and make responsible choices for them, then there's a good chance that their child won't end up starring in their own live-action version of Grand Theft Auto.
There's also the argument that video games make kids sluggish, gain weight, and stay on the couch all hours of the day. And yes, with some of the retro gaming systems out there, I can see how this may have been the case back then. Not so much now though. With such games as Wii Fit, XBOX Kinect Adventures, and Dance Dance Revolution, people haven't had as much fun exercising! There's even video games based on the television show 'The Biggest Loser', a show designed to help people lose weight! So, that argument, especially over the last five years, is a moot point.
And then there's the whole idea of video games rotting the brain away. How video games couldn't possibly be educational. How they were just electronic devices destined to make kids turn into mindless zombies.
I say poppycock and balderdash. Everyone knows that the real things that are turning everyone into zombies is text messaging.

But, all kidding aside, the idea of video games being uneducational is a common misconception held by parents throughout the years.
And the reason why I describe it as a misconception is because there were dozens of educational video games available. Some were fantastic and well-done. Others weren't worth the microchips used to make them. 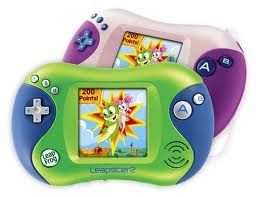 But when you take into account that some of the most popular toys going this holiday season are Leapsters, Leapfrogs, and other toys with the word 'Leap' in the title, there certainly is a market for educational video games.
So, for this blog entry, I've compiled a list of video and computer games that I have played over the last few years, and my goal is to hopefully convince you that video games can be both fun AND educational.
Let's start off with one of my favourites from my childhood. 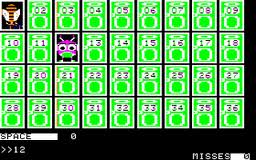 PICK-A-DILLY PAIR (1983)
On the surface, it may seem like a standard matching game. Well, that's because it is. You have a whole bunch of numbered cards and you have to flip them over to make a match. It's especially fun when you play the Jokers & Villains mode, where the game is made more challenging. We used to have one of these computers in my second grade classroom, and this was probably one of the more popular games in the class. Come to think of it, if memory serves me, I held an 'undefeated' title in my second grade classroom for Pick-A-Dilly Pair. Every kid who dared to go up against me in the game did their best, but not one of them could defeat me. Hey, you take your victories wherever you can get them.
But I'm sure you're wondering how this game is educational, and I am getting to that right now. The game helped improve my already terrible short-term memory. By trying to memorize where the cards were placed, it became easier to make matches. The more matches I made, the better my memory became. I would think that to be true for any memory improving game.
The next game on the list was another popular game that kids played in second grade. 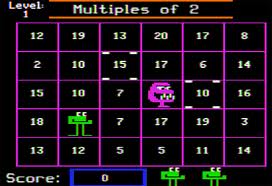 NUMBER MUNCHERS (1981)
Our classroom just had the Number Munchers game, but the company that manufactured the game (Minnesota Educational Computing Consortium) also made several other games with the same theme, including Word Munchers, Math Munchers, Fraction Munchers, and Knowledge Munchers Deluxe. The game allowed you to control a little green man known as a Muncher through a grid of squares. At the top of the screen would be a criteria, such as 'Multiples of Five', or 'Equations that equal the total of 9'. And your job would be to eat all of those numbers that met that criteria. But be careful. If you eat the wrong number, or get caught by the evil beings known as the Troggles, well, it's your funeral buddy.
Hmmm...so why am I getting a Square One flashback here?
Okay, admittedly that's not QUITE how the game was played, but you get the idea.

THE UNISYS ICON COMPUTER SYSTEM (1980s)
There's so many games to talk about for this educational system that we used in Canadian elementary schools. I first used one in the fourth grade, and one of the first games that I played for this system was a game known as Type Away. You would be taught a lesson, with each one corresponding with a pair of letters. The first few lessons taught you where the keys were on the middle row. The first lesson was the letters F and J, and the second was D and K, and so on, and so forth. Wow, I can't believe that I remembered that...funny how some things get burned into your memory, isn't it?
Anyway, at the end of each lesson, if the computer feels you've grasped it, you get a chance to practice your skills, and the letters typed would form a picture.  It could be a snail, a sailboat, even a Canadian flag!
There were other educational games too. Some dealt with morality issues and decision making, such as 'New Kid In Town' or 'A Week In The Life Of...', and some taught you how to do mathematics (Mathville). But it was a neat little computer that taught the user a whole bunch of skills. 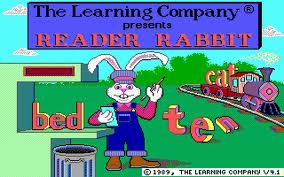 READER RABBIT (1986)
Think of the Electric Company had it been turned into a video game. The star of the game was Reader Rabbit, and he helped teach children in between grades three and six not only how to read better, but how to sound out words, how to spell words, and even taught some basic math skills over the years. It was a very popular franchise back in the day, and rumour has it that for the game's 25th anniversary for 2011, the Nintendo Wii was working on developing a Reader Rabbit game for its console. It was a very cool game for children to learn from, but I have to say that for me personally, it bored me to tears. Still, the staying power of this franchise is nothing short of remarkable.

MARIO IS MISSING (1992)
Okay, now let's get into actual consoles here, and what better way to do this than with Nintendo's flagship character, Super Mario? I am not going to talk about the regular NES version of this game, because let's face it...8-bit graphics could only do so much. But the SNES version was a bit better. You got to play as Luigi in this game, and the object was to save Mario from Bowser's castle in Antarctica, after Mario was kidnapped in their quest to retrieve 45 stolen objects stolen from all over the world by Bowser and his children. You would have to go to various places all over the world such as Australia, Brazil, Japan, and Greece, trying to find the artifacts, bring them back to where they belonged, and take a snapshot of the landmark once you returned it. By completing each stage, you got one step closer to saving Mario.
Oh, but you also had to study the pamphlets collected about the landmarks. For the information clerks will ask you questions about each landmark in order for you to successfully return them. Oh, one more thing. If you can figure out where in the world you are, you can summon Yoshi to the very place you think you are.  If successful, Yoshi will join you, and you can make the speed of the game go a lot quicker. 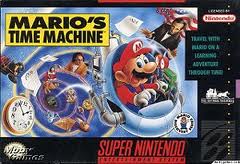 Mario Is Missing dealt with the subject of geography, but a 1993 sequel called Mario's Time Machine was released, which had Mario going back in time to bring back historical artifacts that Bowser had stolen, adding a little bit of American and World history to the mix. And both games were a fun distraction for kids who grew up during that time period. But I admit that one game that also dealt with the subject of geography did it better. 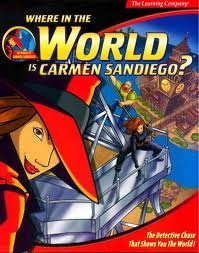 WHERE IN THE WORLD IS CARMEN SANDIEGO? (1985)
This was a game that absolutely fun to play, and later inspired a television quiz show for children that aired between 1991-1996.
You played a detective from the ACME Detective Agency, trying to find a criminal named Carmen Sandiego. She and her henchmen have caused trouble all over the world, and it is your job to travel to various places all over the world to apprehend her henchmen (and ultimately, Carmen herself). People on the street will give clues as to what the henchmen look like, as well as the location where they were travelling. You had to keep track of both very closely, because if one were to make the wrong guess, you could end up on a wild goose chase. To make it even more complicated, you had a deadline to solve the case. If you didn't make the deadline, Carmen and her goons got away. You really had to know your world geography to get through this game, but you also had to keep track of the clues so that you could get an arrest warrant for the right suspect.
I hope that these examples that I have provided for you will illustrate my point that video games can be educational and fun at the same time, putting an end to the argument that video games are mindless entertainment.
Of course, they can also be unintentionally creepy as hell.
Posted by Matthew W. Turcotte at 00:01