Across the Pond and Beyond: Mr. Bean


I know what you all must be thinking.  You all know by now that this blog is all about analyzing pop culture happenings from the past and present, and trying to find a way to come up with lessons learned from characters, or how I'm like the character, show, movie, etc.

Mr. Bean seems to break the mould, doesn't he? 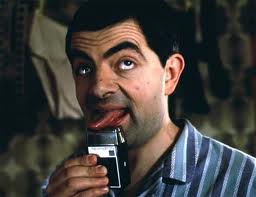 I mean, let's face it.  I'm certainly not the type of man who would take an electric shaver to my tongue inside my bathroom where my tighty-whities are on full display on an indoor clothesline.  No, you have to be a pretty unique individual to do something like that.

Mr. Bean is your quintessential six-year-old boy trapped inside the body of a 40-year-old man (or whatever age Mr. Bean is supposed to be).  Even Rowan Atkinson admitted to this in an interview a few years ago.  He's self-centered, he gets pouty when he doesn't get what he wants, and as far as treating others with kindness and charity, well...he fails miserably at it every time.

I have to admit that when I first started to write this blog a week ago, I knew that I had wanted to feature Mr. Bean as an entry.  Today just happens to be Across the Pond and Beyond Wednesday.  As you know, it's a day that I have devoted to celebrating culture that is not native to North America.  Certainly, Mr. Bean being British certainly qualifies.

I had no idea that when I sat down to write this entry that it would be so difficult to find some similarities between Mr. Bean and Mr. Turcotte.  Almost impossible, really.  I enjoy a challenge however, and Mr. Bean has always been a favourite of mine for years, so I really wanted to do a tribute to him while at the same time finding some sort of link between himself and myself.

On the surface, I didn't come up with anything.

Last year, I bought the Whole Bean DVD compilation.  All thirteen episodes of Mr. Bean, plus an unseen bonus episode were in a three-disc set.  Whereas most television series run in seasons that usually run between twenty-one and twenty-six episodes per year, Mr. Bean's run was more sporadic in nature.  Instead, they were broadcast as television specials that ran between 1989 and 1996.  Bean: The Movie (1997) and Mr. Bean's Holiday (2007) followed afterwards.

I have watched every episode of Mr. Bean, as well as the two movies, hoping that I could come up with examples to use in this blog.

As I said, I enjoy a challenge.

Mr. Bean is the type of person that puts himself first and nobody else.  I'm not exactly like that.  My idea of self-indulgence is walking over to Bulk Barn and buying a bag of sour jujubes.  Mr. Bean, on the other hand, seems to think that the world should revolve around him.  When it doesn't work out that way, he gets frustrated, and pouts.

I'll admit to being that way.  When I was twelve.

Mr. Bean also seems to be incredibly shy.  Well, okay, maybe not shy to the point where he runs and hides from people whenever they approach.  He doesn't exactly make an effort to speak to people near him though.  In fact, in the average episode of Mr. Bean, you'd be lucky if you ended up hearing a complete sentence out of him.

In a few episodes, Mr. Bean seems to exhibit a sort of a mean streak at times.  He sometimes plays pranks on people or hurts people's feelings to get what he wants.  Yeah, that's definitely not personality traits that I want associated with me.  At least, I hope nobody has that opinion about me.

I was ready to give up hope of ever finding something that would forever link me to Mr. Bean, and right at the tail end of the last Mr. Bean episode I watched, it hit me.  That's the character trait that Mr. Bean and I share.  That's what sets both of us apart from everyone else.

First, here's the episode that inspired me to have the thought in the first place.  Watch the clip, and I'll tell you what it is.  Don't worry.  I won't forget.


Yep.  You figured it out.  I use a stuffed animal to paint my walls, and when that doesn't work, I wrap everything in newspaper and blow up a paint can with a firecracker.

You're not buying it, eh?

All right.  Here's the real reason.

Sure, Mr. Bean's method of painting his house isn't exactly the method that I would partake in...but it seemed to work for him.  He was resourceful enough to come up with a quicker solution that many wouldn't care to think of in a million years, but worked out for him.

And, that my friends is where we are similar.

We both do things that work for us that won't work for most other people.

A few years back, when I was in high school, I was assigned to do a class project.  It was in senior year English class, if memory serves me.  We had to do an independent study that was assigned to us back in February.  We had until June to work on it.  Our teacher fully expected us to work on the project the whole semester in addition to our daily homework.  We were supposed to read three books that had a common theme to them, and from there we would have to do an oral and written presentation of the books in the form of a book report and a dramatic portion.

I'll just speed ahead to what most of the other kids in the class did.  Most of them did a standard basic book report on three books in those standard report covers, and their oral presentations for the most part were little fifteen minute speeches that were more or less along the lines of "this is what I read, this is why it links, blah, blah, blah..."

I suppose that way was the safe approach, and certainly speaking, as long as they were accurate in their portrayals of the books and the theme, it would have gotten a good mark.

Even if it completely tanked.

For starters, while everyone else had chosen three books to read, I was taking a chance right off the bat by only choosing two.  I talked it over with my teacher before I got too far with my planning to see if I could do my study with only two books, and she agreed.  I think part of the reason why she agreed to it was because of the choice of topic as well as the choice of authors.  My topic was Irish authors and their portrayal of life in Ireland through the eyes of a person who lived there.  Fair topic.  One of the books I had chosen was "Angela's Ashes" by Frank McCourt.  Good book, by the way.  That book was approved by the teacher, no problem.

It was my second book that raised a few eyebrows.  I initially wanted to read the book "Ulysses" by James Joyce, and immediately my teacher tried to talk me out of it.  She said that James Joyce was an author whose work was incredibly tough to read.  And anyone who has read Ulysses knows that it's one of the biggest books ever written.  At a whopping 265,000 words, is it any wonder why I wanted to only stick with two books?

My teacher did suggest that I could keep the two books I was going to do, and she said that she had no problem with me choosing James Joyce as an author...but that I'd probably be better off reading a smaller book of his.

I disagreed.  I would have welcomed the challenge to read Ulysses and do a book report on it along with Angela's Ashes.

As it turned out though, I did come across another book of Joyce's.  "A Portrait Of The Artist As A Young Man".  I happened to like that book much better than Ulysses, which I gave up on after a month.  Guess the teacher was right after all.

I told her my new book idea, and it was approved.  So, I read both books, and wrote a really detailed written essay on the topic I had chosen.  That part was easy.  I was the type of person who could write a history essay in four hours and still get a ninety per cent on it.  Writing essays and book reports were not a challenge at all.

The oral report was different.  Not because I had stage fright talking in front of my classmates.  I had no problem with that whatsoever.  It was trying to come up with a creative oral presentation that people would remember.

It then dawned on me...why don't I take details from both books and mish-mash them together into a sort of role-playing exercise?

That's exactly what I did.  I turned the classroom into an Irish classroom, similar to what was portrayed in the books, and went from there.

Angela's Ashes, for example, talked about how they used to snack on lemonade and toffees.  I ended up bringing in lemonade and Werther's Originals for the kids to snack on while I presented my oral report.  In the James Joyce book, the main character gets punished by the teacher for misbehaving during a test.  I simulated that part.  The lesson plan as well as the fake test I prepared was all about Irish culture, bringing up key plot points from both books into the lesson plan, so the teacher knew that I did in fact read the books.

I was given an assignment and right off the bat, I made some rather unconventional moves in planning it.  Choosing unfamiliar authors, designing a way-out there oral presentation.  Lots of things could have gone wrong in the whole plan, but I was determined to make it work with my resourcefulness and my creativity no matter how little sense it made to anyone else.

Turns out, it worked out fine.  I didn't even have a single Mr. Bean sized mishap.

The same can be said for Mr. Bean as well.  He may do some of the craziest things in the world, and some of his actions could be considered unconventional, nonsensical, and even dangerous.  Somehow though, it all turned out right for Mr. Bean.  Whether he tries to make it to the dentist on time...

...makes himself a sandwich...


...in the end, it always seems to work out for him...just like it'll work out for me when I find unconventional solutions to my own problems.

Though, in that last clip, Mr. Bean could have avoided that problem by living in a flat without a coin-operated fusebox.  Just sayin'. 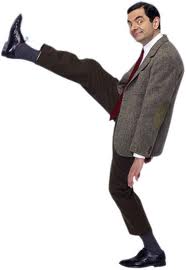