I’m going to do something unique for all of the Monday Matinees in March.  A special theme is planned for this month only on Mondays.  I’ll get to the topic of today’s blog entry in a moment, but because my goal for 2013 is to bring more of me to this project, I will be telling all of you a little story that links up to this blog entry.


One detail seems to stand out at the party that I CAN recall.  When it came time for the birthday boy to open up his presents, one of them ended up being a VHS copy of a popular movie that had been released the year before.  To say that this kid was absolutely excited about getting this movie as a gift would be the understatement of the entire year.  He immediately ran towards his parents and begged them to put the movie inside the VCR so that he and the other partygoers could watch it on the television in the living room.  Of the ten guests that were invited, I think seven of them joined the birthday boy in the living room to watch the movie.  Myself and the other two?  We stayed in the kitchen playing “Operation”.  I don’t know what it was about the movie, but at the time, it did not interest me at all.


It wasn’t until about ten years later that I decided to watch the movie on cable television (it was a Sunday afternoon and nothing else was on), and I immediately regretted not watching it at that childhood birthday party.  Sure, the movie was rather dark and dismal, and some of the characters in the movie did look incredibly scary...but the way that it was presented was brilliant, and I thought that everyone who appeared in the film gave it their all.


The film became a summer blockbuster in the year 1989...in fact it was 1989’s highest grossing film in North America.  It earned $46.2 million during the film’s opening weekend, grossed over $400 million worldwide, and became the very first film to gross over $100 million during the first ten days of release.


And, hey...it also had Prince contributing several songs to the film’s official soundtrack, including the #1 single “Batdance”. 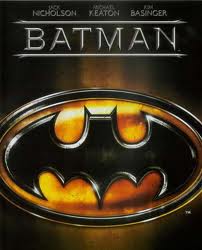 The film that we’ll be looking at in the first installment of the Monday “Bat-inee” is the Tim Burton directed film, “Batman”, which was released on June 23, 1989.  The film that I opted to skip out of at that childhood birthday party I attended years ago.


And don’t think that the word “bat-inee” is a typo.  All this week, I’m spotlighting Batman films every Monday in March.  Hence the phrase, Monday Bat-inee. 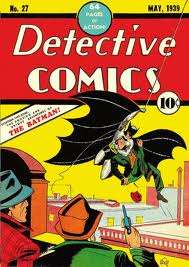 As many of you know, Batman is a superhero that was created by Bob Kane and Bill Finger.  Batman’s been around since May 1939, when he made his first appearance in Detective Comics #27.  Over the next seven decades, Batman has appeared on a regular basis in several publications by DC Comics.  You’re also probably aware that Batman’s real identity is that of billionaire philanthropist and industrialist, Bruce Wayne.  By day, he lives a life of luxury in his mansion where his faithful butler, Alfred has served him for years.  But by night, he dons the black cape and tights, steps into the Batcave, and hops in his Batmobile to protect the people of the fictional Gotham City as Batman.


And Bruce’s motivation behind why he would assume the identity of a superhero is understandable.  When he was just a young boy, he witnessed the murder of his parents, and since that day, he promised himself that he would make all criminals pay for their crimes.


Batman stands out among the other superheroes of the day (Spider-Man, Superman) by not having any special superhuman powers.  He used his brains, his wits, and his natural agility to defeat evil forces...which Gotham City seemed to have more of than actual citizens.  I think that might be one reason why I kind of admire Batman a lot more than other superheroes.  Deep down underneath those black tights and cape, he’s just a regular guy like you or I...albeit a regular guy who has been pissed off at criminals for some seventy-four years.

The idea of making Batman into a film wasn’t too farfetched.  After all, a successful (not to mention campy) television series and film which starred Adam West and Burt Ward kept audiences entertained throughout the later part of the 1960s.  And a screenplay for a Batman film was in the planning stages as early as 1980...a full nine years before the 1989 “Batman” film was released. 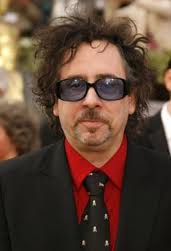 Tim Burton was hired to direct the film, while Sam Hamm came up with the first draft of the screenplay.  Although Warner Brothers was reluctant to greenlight the film at first, the project went ahead in 1988 following the massive success of Burton’s 1988 film, “Beetlejuice”.  In fact, the star of Beetlejuice, Michael Keaton, was cast in the iconic role of Batman.  And this was a decision that was not met well with fans of the Batman series.  It was reported that as many as fifty THOUSAND letters were sent, demanding that Burton rethink his decision to cast Keaton in the role.  Even screenwriter Sam Hamm expressed his concerns about casting Keaton in the role of Batman. 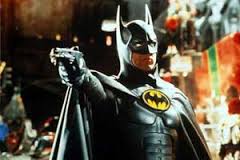 I mean, I’ll be the first one to admit that Michael Keaton might not have been my first choice when it came to casting Batman.  He starred in a film called “Mr. Mom”, after all.  Of course now that I watch the 1989 film again, I now can’t see anyone else playing Batman! 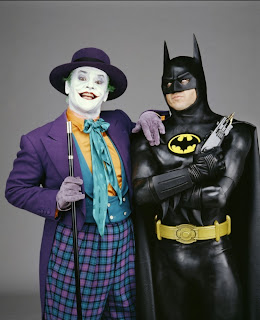 TRIVIA:  And Jack Nicholson ended up scoring huge when he agreed to sign onto the film...albeit with conditions.  Among some of these conditions?  Well, how about a high salary, a percentage of the box office earnings, and the ability to pick and choose his shooting schedule?  How’s that for a sweet deal! 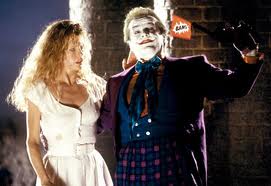 I won’t bore you too much with the plot of the film.  I imagine that by now, almost all of you have seen this film at least once, so you know all about how Jack Napier became the Joker, you know about the romantic spark between Bruce Wayne and Vicki Vale, and you know about the Joker using parade floats filled with toxic gas to kill the population of Gotham City.  No need to delve any further.


Besides, when I was watching the movie as well as doing research on some of the behind-the-scenes happenings of this film, I found the backstage trivia quite interesting.  And, I hope that you find it interesting too.


01 – The budget for the film was originally an even thirty million dollars, but it was increased to $48 million.


02 – As a result of the Writers Guild of America strike of 1988, Sam Hamm was forced to drop out of the project.  The screenplay was finished by the uncredited Warren Skaaren, Charles McKeown, and Jonathan Gems.


03 – Before Kim Basinger won the role of Vicki Vale, the part was originally given to Sean Young, who had signed on to begin shooting the film in October 1988.  However, when Sean was thrown off a horse before filming, she sustained injuries that prevented her from being able to continue with the movie.


04 – After Sean Young dropped out of the film, Michael Keaton had suggested that Michelle Pfeiffer take over the role, but she turned it down.  However, she did join the cast of the 1992 film, “Batman Returns” in the role of Batman villainess, Catwoman.


07 – Robin Williams reportedly campaigned to get the role of the Joker, and was well on his way to being cast...but when producers approached Jack Nicholson and told him that Williams would take the part if Nicholson didn’t.  Because Williams felt like he was used as bait by producers, he refused to appear in any film project made by Warner Brothers (including a role in 1995’s “Batman Forever”) until the studio apologized.


08 – Other actors considered for the role of the Joker included Willem Dafoe, Tim Curry, John Lithgow, and David Bowie.  Truth be told, I think Bowie would have made a great Joker!


09 – The entire picture only took twelve weeks to film, wrapping up production in January 1989.


10 – Billy Dee Williams had it written in his contract that he would be brought back to play the role of Two-Face in the 1995 film “Batman Forever”.  But when producers decided to use Tommy Lee Jones instead, the company bought out Williams’ contract.

11 – The theatrical trailer for the movie was reportedly so well-received that people would pay for movie tickets just to see the trailer, and then would exit the theatre!


12 – Appropriately enough, the film was released on the 50th anniversary of Batman’s first appearance.


13 – Before Prince was considered to compose some of the music for the film, Michael Jackson was asked...but he had to turn down the opportunity because he was too busy touring. 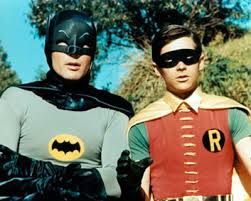 14 – The original script was supposed to feature Dick Grayson (a.k.a. The Robin), and Kiefer Sutherland was considered for the role.  But it was decided to drop Robin from the film script before the film went into production.


15 – Ever wondered where Gotham City was located?  If you go by the map that was used in the film, Gotham City is really Vancouver, British Columbia, Canada! 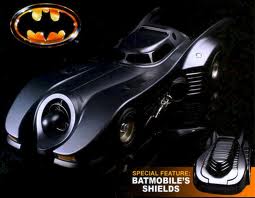 16 – The Batmobile was built on the chassis of a Chevy Impala.


17 – David Cronenberg was offered the opportunity to direct the film, but declined.


18 – Only two of the actors in 1989’s “Batman” appeared in the next three Batman films...Michael Gough and Pat Hinkle (who played Commissioner Gordon).


19 – The film won an Academy Award for Best Art Direction. 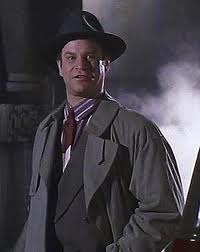 20 – This may be spoiling the ending a smidgen, but Robert Wuhl’s character of Knox was supposed to die during the parade scene towards the end of the film.


21 – When Keaton put on the Batsuit, it nullified his sense of hearing.  Fortunately, the lack of hearing helped Keaton get into character better.

22 – Kim Basinger screams a total of twenty-three times during the whole film!  I sure hope she had a huge stock of throat lozenges!


23 – Jerry Hall was cast in the movie by a crew member who happened to spot her while she was on a break filming an ad for chocolates.


24 – Keep an eye on one of the Joker’s goons in the scene where the Joker causes havoc at a museum.  One of them is played by Tim Burton.


25 – Have you wondered just how many people end up dying in the film?  According to the Internet Movie Database, the total body count is fifty-six!


(Wow, you know, come to think of it, maybe “Batman” wasn’t the best choice of entertainment to showcase at a 9th birthday party.  But, it wasn’t my party, who was I to say anything?)

So, that’s our first Monday Bat-inee out of the way.  Next week, we’ll be going ahead in time three years to take a look at Keaton’s second turn as the heroic Batman.  I hope you’re excited!
Posted by Matthew W. Turcotte at 05:59