How Huey Lewis Made Me A "Sports" Fan

I'm going to offer a bit of a warning to all of you at this time. I'm not really in the greatest of moods today. As I type out this entry tonight (well, I guess by the time you read this, it'll technically be LAST night), I am trying my best not to launch into a rant filled with language that would make a sailor blush. I won't be going into too much detail about why I'm not in the best of moods, because I would need a whole week of blog entries to try and get all of my feelings out.

Instead, I'm going take the opportunity to use this Sunday Jukebox entry to work the bad mood out of my system by talking about one of my favourite groups of the 1980s.

And, I'm doing this for two reasons.

First, I love this band so much that I found it incredibly difficult to narrow my choice down to just one song. Three of my favourite songs by this band actually appear on the same album, so I thought it just made sense to talk about the album in general rather than do three separate entries.

And secondly, one of the best ways for me to improve my mood is to just listen to an album that I absolutely love listening to, cranking it up as loud as it can go (without causing the neighbours to complain), and losing myself to the music. I owned the cassette tape of this album, and played it so many times, the tape wore out! Let's just say that my teen years was filled with a lot of angst, and a lot of tape rewinding (I didn't own a CD Player until I was 17).

So, my goal for today is to do an entry on one of my favourite albums in hopes that my mood will improve.

So, let's take a look at our featured album for today. 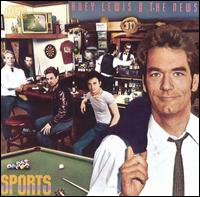 I know what you're thinking. It seems a bit crazy that one of my favourite albums was released when my musical tastes included that of Raffi and Sharon, Lois, & Bram. The truth is that I was always surrounded by Huey Lewis & The News growing up. They also happened to be one of my sister's favourite bands in high school, and whenever I was in her car back in those days, I always heard this tape blaring out of the car radio. I know it's been almost thirty years since this album was first released, but some of my earliest memories always had this album for a soundtrack.

I eventually became a fan of this band myself. I think at some point, I listened to every single one of their albums. “Fore!” was a decent album that I also wore out. “Picture This” was another album that I particularly liked. Even their 1980 debut album was a great album, even though none of the singles from the album did particularly well on the charts.

Certainly, Huey Lewis & The News had tons of success throughout the 1980s and early 1990s. With a total of nineteen Top 10 hits on three different music charts (Hot 100, Adult Contemporary, Mainstream Rock), the band made their mark on the music industry. And as of 2012, the band is still together, performing concerts all over North America, and releasing hits for movie soundtracks. 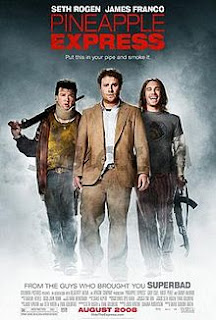 TRIVIA: In addition to contributing two songs for the 1985 feature film, “Back To The Future”, they also performed the theme song for the 2008 film “Pineapple Express”. 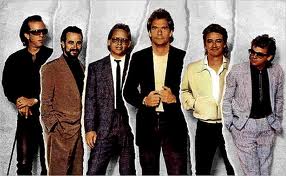 But, I think if I had to name the album that best defined this group, it would be “Sports”. The album spawned five Top 20 singles, one of which hit #1 on the Top Rock Charts, between 1983 and 1984, and the album hit the #1 position during the first week of July 1984.

At the time of the album's release, the band was made up of Huey Lewis (main vocals, harmonica), Sean Hopper (keyboards), Bill Gibson (percussion), Johnny Colla (guitar, saxophone), Mario Cipollina (bass), and Chris Hayes (guitar). And here's some trivia about the album cover. It was taken at the 2 A.M. Club, in Mill Valley, California (not to be confused with Hill Valley, of “Back to the Future” fame).

Let's take a look at each of the singles that charted from this album (five of the nine original tracks hit the charts which was very good for an album), because there's a lot of trivia that can be found with each release.

This was the first song released from “Sports”, which also happens to be my favourite song of the whole album as well.

The first release from “Sports” was a strong one from the very beginning. Former band member Chris Hayes once stated that he didn't know why “Heart and Soul” sounded so good from the beginning. According to Hayes, the band often had to record and re-record the guitar parts of each song, but for that particular song, the band was lucky enough to get the riff on the very first try. Listen to the song up above, and you'll see what I mean. It's a great song! Here's a bit of trivia about this song's music video as well. You see the woman that Huey is dancing with in the club? If you're a fan of soap operas, you might recognize the woman as actress Signy Coleman, who had roles on both “Guiding Light” and “The Young and the Restless”. And this isn't the first Huey Lewis & The News video that she makes an appearance in either...

“I Want a New Drug” was the second release from “Sports”, and just like the first video that was released, Signy Coleman makes a cameo in this video as well (actually, several cameos). It also happens to be the highest charting single from “Sports”, just missing the Top 5 on the Billboard Charts. But despite its success, it was also the subject of some controversy. A few months after “I Want a New Drug” was released, artist Ray Parker Jr. released the song that he had done for the 1984 film “Ghostbusters”, and there was something about it that made Huey Lewis see red. Have a listen to Ray Parker Jr. song HERE, and then compare it to “I Want a New Drug”. There's a bit of a similarity, don't you think? Well, as it turns out, there's a lot more to the story than just that. At first glance, it might seem like just a bit of a wacky coincidence. Lots of songs sound the same. Just listen to Madonna's “Express Yourself” and Lady Gaga's “Born This Way” for another example. But what if I told you that Huey Lewis & The News had been approached to do the theme song for “Ghostbusters” first? Unfortunately, the band had already made a commitment to “Back To The Future”, and had to turn the offer down. Because of this, as well as the similar sounding song that Ray Parker Jr. recorded, Lewis sued Parker in 1984. The case was eventually settled out of court, but it certainly left a sour note on an otherwise fantastic tune.

THE HEART OF ROCK & ROLL
Released April 10, 1984
Peak Position on the Billboard Charts: #6

The song was written by Lewis and Colla, and was the third release off of “Sports”. What was unique about this song was that several versions of the song were recorded specifically for various radio stations. You know the part of the song where Huey Lewis was shouting the city names of Cleveland and Detroit towards the end of it? He recorded several versions of the song with different place names that fit with the geographic area of the radio station. It was a neat idea. The song lyrics themselves had changed a bit from the original version when the song was being recorded. Initially, the song chorus was going to go “The Heart of Rock & Roll is in Cleveland”, after the band performed a successful and enjoyable concert in the town (though considering that Cleveland is the home of the Rock and Roll Hall of Fame, the original lyrics were a double entendre of sorts). Somehow, the lyrics were changed to “The Heart of Rock & Roll is still beating.” The music video was also problematic to shoot, in particular with the New York City shooting locations. The video was filmed during the winter of 1984, where temperatures were well below zero degrees, and the band was dressed lightly. Huey Lewis' wife was also pregnant at the time, which also made the shoot dicey, as Lewis was constantly checking to see if she was doing all right. To add salt to the wound, although the song was a decent hit, it admittedly isn't one of my favourites. Apparently, Blender magazine agreed with me. In 2009, they listed the song at #6 on their list of 50 Worst Songs Ever! Ouch.

This is also a song that I absolutely love of Huey Lewis & The News...even if the music video seems to be composed of gouda, bleu cheese, and limburger by 2012 standards. I suppose that back in '84, it worked enough for the band to score yet another #6 hit (this seems to be a recurring number for this particular album). This song is also notable in the United Kingdom, as it was the band's first Top 40 single in that nation. Mind you, the song only peaked at #39 on the charts there, but hey, a Top 40 hit is a Top 40 hit. Not much else can be said about this video except that in the part where five of the six band members had their heads sticking out of the sand, the members claimed that they really were buried! If that was the case, it must have taken a lot of work to get that particular shot!

By now, you've seen that the songs of Huey Lewis & The News are light-hearted, and the music videos are whimsical, fun, and happy. But this song was quite serious in nature. The song itself was written by Andre Pessis and Ken Wells, and was about the Vietnam War, and what soldiers and veterans were thinking while they were serving in the war. When the band performs the song live, Lewis often dedicates the song in memory of the casualties of the Vietnam War, and in some cases, the band would be joined onstage by ESPN personality Chris Berman, who has appeared as a surprise guest. The song was written with a strong message, but it was also the lowest charting song to be released from “Sports”, and also the song that got the most mixed reaction from critics. But it is a decent song, and it was a great final release for “Sports”.

That's our look back on the most successful album that Huey Lewis & The News released, and would you believe it? My bad mood has improved greatly since. Funny how music tends to make even the saddest people feel better, huh?

BONUS QUESTION: How do you deal with the after-effects of a stress-filled day?
Posted by Matthew W. Turcotte at 00:02