We’re almost at the end of June, and you know what that means?  Summer vacation is just around the corner!


Well, all right, depending on the region you live in, summer vacation might already be here, but in the area I grew up in, the last day of school was usually held the week of June 21-27.


And I was one of those kids who could not WAIT for the school year to end.


I mean, let’s face it.  Many of my classmates and I did not see eye to eye, so to have freedom from them for two months was a wonderful perk.  However, there were other reasons to celebrate the end of the school year.  It meant two months of being able to sleep in as late as you wanted.  It meant not having to do any sort of homework until September.  It meant partaking in many days and nights of summer activities.  In fact, if you stay tuned for this week’s upcoming Thursday Confession, I’ll tell you about one of my fondest summertime memories.


I think perhaps the reason that I enjoyed summer vacation the most was the fact that after being cooped up in school for ten months, it was nice to have a couple of months of relaxation and peace.  No more pencils, no more books, no more teachers’ dirty looks.


Yes, even in the late eighties and early nineties, we kids still sang this rhyme.  Except during the holiday season, where we sang “Joy to the world, the school burned down, it burned right to the ground...”.


It seems like such a silly, innocent childhood rhyme.  But, did you know that rhyme ended up being included in a Top 10 hit back in the 1970s?  It happens to be true.  In fact, why don’t we take a listen to the Sunday Jukebox entry for today right now? 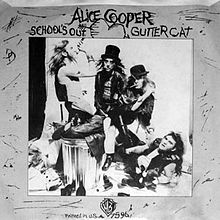 I think it was almost a rite of passage to play this song on full blast at least once on the last day of school.  I know that I used to.  It really was a perfect song to describe the joy we children all felt on the cusp of summer vacation.  As it turns out, that was the very reason why the song was written, according to the artist who performed this hit. 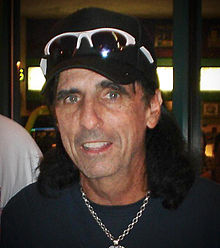 Meet Vincent Damon Furnier.  He was born on February 4, 1948 in Detroit, Michigan.  Believe it or not, he grew up as the son of a lay preacher and the grandson of an apostle of the Church of Jesus Christ.  Furnier was also fairly active in his church during his childhood, most notably between the ages of 11 and 12.


During his childhood, Vincent suffered from a series of childhood illnesses, but managed to stay in school, and actually gained admission to several post-secondary institutions including the University of Arizona and the University of Colorado.  But Vincent turned down these offers, instead wanting to pursue a career in music.


Nobody could blame him though.  He had a love of music, and when he was sixteen, he ended up getting his first taste of being a part of a band.  He was eager to participate in a local annual letterman’s talent show, but he felt that he needed a group to perform with him so that he could get the full experience.  So, he gathered a group of people who were on the school cross-country team, and together they formed the group known as “The Earwigs”.  However, nobody in the band knew how to play any musical instruments, so they basically mimicked a performance by “The Beatles”.  The group ended up winning the talent show, and they loved the experience so much that they decided to learn how to play real instruments.  After purchasing some from a nearby pawn shop, the group soon changed their name to “The Spiders”.  The group consisted of Vincent on vocals, Glen Buxton on lead guitar, John Tatum on rhythm guitar, John Speer on drums, and Dennis Dunaway on bass guitar.  The group often performed around the Phoenix area where they appeared on stage in front of a huge black spider web backdrop.  The group even released a single in 1965, a cover version of The Blackwells song “Why Don’t You Love Me”.


The following year, John Tatum left the band and was replaced by Michael Bruce, and scored a local #1 hit on the radio with “Don’t Blow Your Mind”, an original composition.  They changed their name to “The Nazz”, replaced the departing John Speer with Neal Smith, and relocated to Los Angeles, California.  However, the band was left with a bit of a dilemma when they discovered that musician Todd Rundgren had also been using the name “Nazz” for his band, which meant that the band was forced to change their name for the fourth time in four years.


However, Vincent Furnier also believed that the band needed a gimmick.  They needed something that would stand out.  So, imagine their surprise when Furnier suggested the name “Alice Cooper”.  Furnier believed that the name was so wholesome and non-threatening that it would knowingly clash with their hard-edged, gothic image and sound.


(Plus Alice Cooper happened to be the name of Betty’s mom in Archie Comics.) 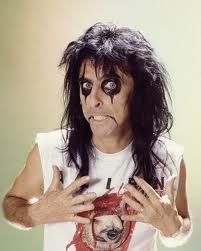 Eventually, Vincent would later adopt the band’s name as his own stage name, and since 1968, he has gone by the name Alice Cooper ever since.  As for Alice Cooper’s signature look, he explained that it came from a variety of films that he watched over and over, including “Whatever Happened To Baby Jane” and “Barbarella”.


However, with the new name change and direction, the band Alice Cooper soon found that it was difficult to get their name out there.  It certainly didn’t help matters much that at a gig at the Cheetah Club in Venice, California, everyone left after just ten minutes!  However, this misfortune worked out to Alice Cooper’s advantage as they were approached by music manager Shep Gordon.  Gordon saw potential in the band, and arranged a meeting with Frank Zappa, who was actively looking for acts to sign to his new record label, Straight Records. 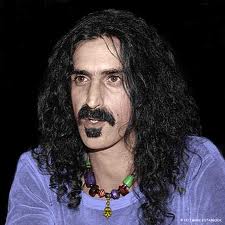 
Over the next few years, Alice Cooper seemed to struggle with trying to get their music out there, as their first two albums didn’t make a great impact on the charts.  And then there was the “Chicken Incident” at the Toronto Rock and Roll Revival concert in September 1969, where Alice Cooper mistakenly believed that a live chicken that happened to make it on stage could fly, and as a result, the chicken ended up being completely torn apart by the people in the audience, labelling the band as being “shock rockers”.


But when Alice Cooper released the single “I’m Eighteen” in 1970, the single ended up reaching #21 on the Billboard Charts.  When Warner Records ended up purchasing Alice Cooper’s record contract from Straight Records, the album that the song came from (Love it to Death) was re-released, and became the band’s breakthrough album, finally giving the band some recognition.


Of course, over the next few decades, Alice Cooper would end up going solo, releasing hundreds of singles, and dozens of albums.  But, I think everyone can agree that “School’s Out” was probably one of his best and well known hits.


As I said earlier in this blog entry, Alice Cooper stated that the reason behind writing the song was based on his response to the following question...what are the greatest three minutes of your life?


Alice Cooper suggested that there were two times in which we all felt this during the year.  One was on Christmas morning just before you open up your gifts.  The second was on the last day of school, particularly during the last three minutes which Alice Cooper described as being similar to a slow fuse burning.


And, in this case, that slow fuse burned into a huge explosion.  Quite literally, if the lyrics are any indication.  Not only is school out for the summer in the song, it’s out FOREVER, as the lyrics imply that the school has blown up.


But if there’s one thing that the song did other than make kids look forward to the end of the school year, it netted Alice Cooper their biggest hit yet.  And, it made people see that there was more to Alice Cooper than just a novelty hit, and showed that they rose above the “Chicken Incident” to become respected artists in the music industry.


And besides, it inspired a really awesome Staples commercial.